Each isotope has a single proton, but a different number of neutrons. They also each have a single electron.

Nuclei that contain the same number of protons but different numbers of neutrons are called isotopes. While the atoms of different isotopes of the same element are chemically identical to each other, their physical properties can be quite different.
Most elements have more than one naturally occuring isotope. For example, Carbon naturally occurs as C-12,
C-13 and C-14. However, other isotopes may be created by a process called artificial transmutation, in the case of Carbon this inculdes C-15 and C-16. Artificial transmutation takes place in a laboratory using a variety of nuclear reactions to produce the end result. 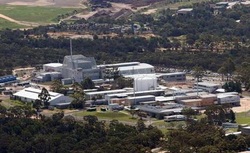 The Lucas Heights Reactor is the only Nuclear Reactor in Australia. It is used to produce artificial isotopes of elements such as Cobalt for medical purposes by the process of Neutron absorption, where a stable isotope of Cobalt, Cobalt-59, is bombarded with neutrons in the nuclear reactor, to create Cobalt-60.