A gamma ray is a very high energy photon. A photon of light is given off when an electron gives off energy and jumps down to a lower energy state. A gamma ray is given off from an excited nucleus.The nucleus may have become excited when a radioactive decay (alpha or beta decay) has taken place, or when there was a violent collision with another particle (not as common).

One ofthe symbols used to denote gamma radiation. Being a form of electromagnetic radiation like light, gamma rays have no mass and no charge, hence the two zeros for atomic and mass number.

The release of a gamma ray (aka gamma particle) as element A, the metastable form of element B (they are the same element) releases energy and returns to the more stable ground state.

Here metastable Cobalt-60, formed from the bombardment of Cobalt-59 with neutrons, releases energy from the nucleus in the form of gamma rays and settles down to a lower energy ground state. Nucleons shift a little in the nucleus when this occurs.
In some cases, a nucleus may remain in an excited state for some time before emitting a gamma ray. The nucleus is said to be in a metastable state, and is called an Isomer.
An excited nucleus may also return to ground state without emitting a gamma ray. This is called internal conversion and in this case the nucleus interacts with one of the orbital electrons, ejecting it from the atom with the same kinetic energy (minus the binding energy of the electron) that the emitted gamma ray would have had

Gamma radiation is treated as a wave rather than a particle. A gamma ray is a high energy photon, a form of electromagnetic energy. As such, it travels at the speed of light, 3 x 10^8 metres/second, has no electric charge and no rest mass (it may have mass due to its motion (Einstein's theory of relativity). It also has no charge. They rarely interact with any other matter, occasionally colliding with a nucleus or electron whereupon energy is transferred and the electron may have its path altered, causing it to interact with other particles nearby. As a result, they penetrate matter very easily, and will travel a long way in air. Most of the gamma rays will be stopped after they have passed through a 5 cm thick sheet of lead (which is very dense) or several metres of concrete (obviously less dense!) 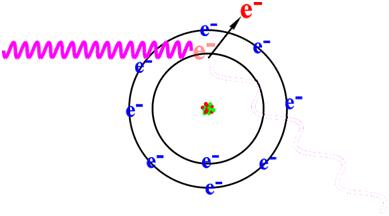