A radioactive isotope will decay by one of the methods discussed elswhere on this site. However, this does not happen immediately, but takes time to occur, and will happen spontaneously. The time that a particular nucleus will decay cannot be predicted, but the time that it takes for half the nuclei in a sample of radioisotope can.

An unstable nucleus will eventually decay. However, this event will not occur at a particular time, it is an unpredictable random event. We can determine on a probabilistic basis, approximately how many nuclei (but not which ones) will decay over a given time period, based on the assumption that each nucleus has an equal probability of decaying in each second that it exists.
The relationship between number of nuclei remaining and time elapsed can be mathematically modelled by an exponential decay function of the form 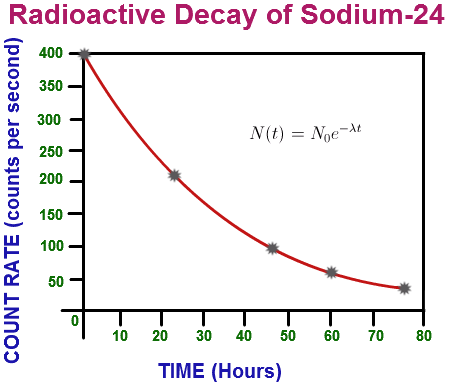 Rather than complicated formulae, a simpler way of describing and comparing the decay rates of different isotopes is to look at the "half-life", or the time taken for half the parent nuclei to decay spontaneously into their daughter nuclei. It is known that the half life of a radio isotope is constant and generally unaffected by environmental conditions such as temperature, magnetic field or chemicals. The longer the half life, the longer it takes for the substance to decay.

Decay curve showing amount of original material that has not decayed after each half life has passed. After one half life, there is half the original amount. After two half lives, half of the amount remaining after one half life has also decayed, meaning there is a quarter of the original material undecayed, and three quarters of it has decayed. Theoretically, there will always be a little left!
Obviously it is not possible to count the nuclei to determine half life, so instead Physicists look at the activity of the sample (the activity is the number of radioactive decays occuring each seconed, and is measured with a Geiger Counter or similar device). Each half life the number of nuclei decaying reduces by half, meaning the activity reduces by half.
Activity is measured in Becquerels, Bq. 1Bq=1 disintegration per second. 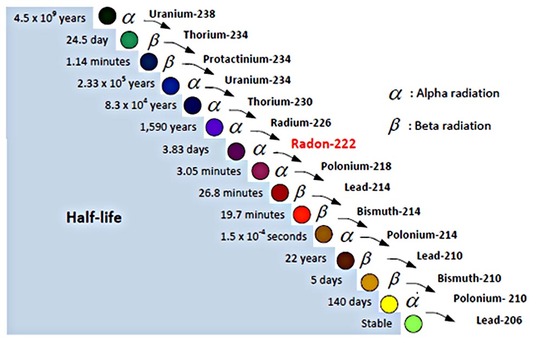 Half lives can be any length of time, form very short to very long. This is the decay series for Uranium-238. Some of the isotopes that Uranium-238 produces have very short half lives and thus disappear very quickly. Because Uranium-238 is much slower to decay, these isotopes are constantly being renewed, so are stil lin existence today.

While Schrödinger's famous thought experiment was more to illustrate the concept of indeterminacy in Quantum Physics, it is also an illustration of the fact that the decay of a particular nucleus is not predictable.

One can even set up quite ridiculous cases. A cat is penned up in a steel chamber, along with the following device (which must be secured against direct interference by the cat): in a Geiger counter, there is a tiny bit of radioactive substance, so small, that perhaps in the course of the hour one of the atoms decays, but also, with equal probability, perhaps none; if it happens, the counter tube discharges and through a relay releases a hammer that shatters a small flask of hydrocyanic acid. If one has left this entire system to itself for an hour, one would say that the cat still lives if meanwhile no atom has decayed. The psi-function of the entire system would express this by having in it the living and dead cat (pardon the expression) mixed or smeared out in equal parts.

It is typical of these cases that an indeterminacy originally restricted to the atomic domain becomes transformed into macroscopic indeterminacy, which can then be resolved by direct observation. That prevents us from so naively accepting as valid a "blurred model" for representing reality. In itself, it would not embody anything unclear or contradictory. There is a difference between a shaky or out-of-focus photograph and a snapshot of clouds and fog banks.