In Alpha decay, the nucleus emits an alpha particle, identical to a Helium nucleus

One of the symbols for an alpha particle. Note that it has 2 protons Z=2, 2 neutrons (making a total of 4 nucleons A=4) and a charge of 2+

Alpha decay of element X to element Y. Energy is also given off. Atomic and Mass Numbers are Conserved.

Alpha particles are identical to a Helium nucleus with two protons and two neutrons. Since they have no electrons, this means they have a charge of 2+.This means that as they travel through a medium (eg air), they interact with nearly every atom they encounter. The double positive charge means that they attract electrons from the outer shells of these atoms, causing the atoms to become positively charged ions, and leaving loose electrons behind in their path. The air is said to have become ionised, and the alpha particles are said to have a high ionising ability. Being relatively heavy compared to other radiated particles (mass=4.002602 u, where u=1.66 x 10^-27 kg and is the standard atomic mass, equal to the mass of 1/12 of a Carbon-12 atom), the alpha particle is also relatively slow, with a speed of up to 2 x 10^7 m/s, which is about 10% the speed of light. This makes it even more likely to interact with other atoms and slow down relatively quickly. In air, alpha particles may only travel a few centimetres before they stop, and are easily stopped by a piece of thin card. They are said to have a poor penetrating ability.
The energy of an alpha particle is typically about 5-10MeV, or 8 - 16 x 10^-13 Joules. 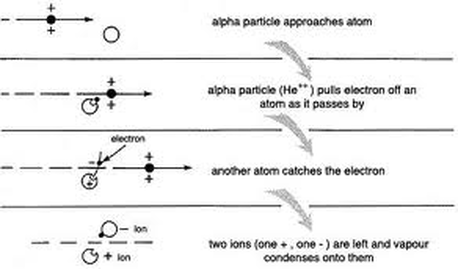