During a living organisms life, it takes in Carbon in some form. Once the organism dies, it no longer takes in any Carbon. Naturally occuring Carbon contains two main isotopes, stable Carbon 12 and radioactive Carbon 14. After death, the amount of Carbon 14 reduces by decay to Carbon 12, and hence the ratio of Carbon 12 to Carbon 14 increases. By comparing this ratio to  the ratio of a living organism of similar type, the age of objects that were made of carbon, and long dead organisms can be determined 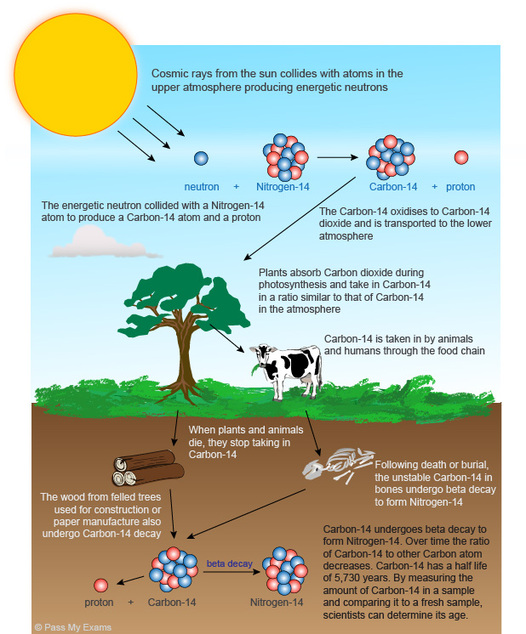 Carbon dating in this manner is really only useful for dating objects less than 60,000 years old. The amount of Carbon-14 remaining after this time is usually too small to measure accurately. The amount of Carbon present in the atmosphere has not always been constant, and this must be allowed for in calculations as well.
Other radio isotopes with longer half lives, such as Uranium-238 have been used in dating geological samples, and the oldest rocks on earth are believed to be about 4 x 10^9 years, with the first fossilised organisms appearing in rocks aged at least 3 billion years ago.