A number of different tools have been created to detect levels of radioactivity. Some of these are intended to determine how much radioactivity an individual has been subjected to, and some are used to determine radiation in the environment, eg in Mining or Hospitals.

There are a variety of devices for measuring the amount of radiation a person has been exposed to. These are usually worn by the person, and used by people working in environments where there is a risk of continuing exposure to low level radiation, such as dentists, personnel in nuclear power plants, radiographers, some hospital workers etc. There are a variety of devices available, older types had filters of various thickness and material covering a piece of photographic film in a holder. After a period of a few weeks, the film is removed and analysed. This method does not give an instant reading, and is being replaced by more immediate devices. 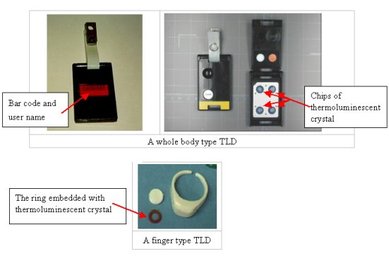 A thermoluminescent device contains crystals of material that glows when radiation is detected. With a variety of crystals, different types of radiation can also be detected.

More recently small devices that can be plugged into a computer and read instantly are being used. This is particularly useful when the wearer needs to monitor exposure more regularly. They are called active devices and utilise and ion storage detector to monitor exposure. Refer to http://www.irs-limited.com/articles-and-media-publications/practical-radiation-protection-the-role-of-personal-dose-monitoring-in-a-radiation-safety-programme/ for more detail on devices currently in use. 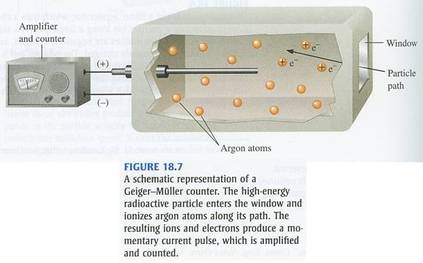 www.ltcconline.net
The electrons released through ionisation of the Argon gas are attracted to the positively charged central electrode, causing a current to flow momentarily, measured as a pulse, and often heard as a click on a loudspeaker connected to the circuit.

Other Devices for Measuring Radioactive Activity

Another device that counts decays is a Scintillation Counter which contains atoms that are easily excited by radiation and emit visible light as they return to their ground states. For more detail http://www.ehs.psu.edu/radprot/LSC_Theory2.pdf (this is fairly complicated)
Semi conductor devices also exist that utilise diodes made of semi conductor material, which enables electrons to move within the material when excited by radiation, and produce short electrical pulses as a result. http://nsspi.tamu.edu/nsep/courses/basic-radiation-detection/semiconductor-detectors/introduction/introduction (this is simpler, and there is information about other detector types here as well)
Other devices exist that allow the track of the particle to be seen rather than counting the number. These include cloud chambers (little used today), bubble chambers (more efficient) and wire chambers, among other more sophisticated methods. The following http://home.web.cern.ch/about/how-detector-works gives information about some of the work done in detecting and identifying particles at CERN, the European Organisation  for Nuclear Research, which includes the Large Hadron Collider amongst its facilities.