Elementary Particle Physics has only really been studied since the beginning of the twentieth century. Elementary Particles are considered to be the basic building blocks of all matter. Studies of them have required enormous amounts of energy and the construction of various types of particle accelerometers. In Melbourne, we have the Synchrotron. Information about how it works, and what it is also used for can be found http://www.synchrotron.org.au/

In order to probe the nucleus of an atom more closely to produce and study new particles, and to gain information about the basic forces and constituents of nature, high energy accelerators are used to project particles at the nucleus. This is why Particle Physics is also known as High Energy Physics.
The study of Particle Physics is complex, and requires a much deeper understanding of the principles of basic physics than will be developed in year 11. A very simple introduction can be found here http://www.pas.rochester.edu/~pavone/particle-www/particle_physics.html
Physicsts have found that all matter can be broken down into 12 basic building blocks, 6 Quarks and 6 Leptons. The quarks are what make up the protons and neutrons, among other things, the Leptons include electrons. The forces that bind these particles are considered to be carried by particles.A table of the properties of these is shown below. However, this is a simplification, as these particles do not always behave as physical particles do, but also behave in a wave like manner, with different properties to a physical particle. 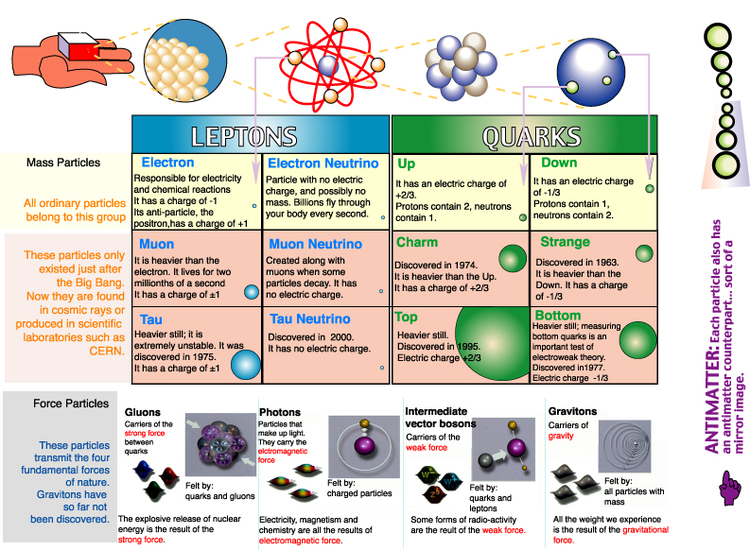